Osteoporosis does not develop overnight. Bone mass can be lost steadily for many years without experiencing any symptoms or signs of the disease until a bone fractures. For this reason, osteoporosis is often called "the silent thief" - literally stealing our bone mass without giving us any indication whatsoever. If osteoporosis is first diagnosed at the time a fracture occurs, it is already fairly advanced. A fragility fracture is the most significant clinical consequence of osteoporosis, and therefore preventing a fracture, or the second fracture if one has already occurred, is of paramount importance.

There are various ways to determine the risk of fracture in a client. Below are some general guidelines of who should be assessed, the current methods for assessment and the most common methods for calculating a future fracture risk.

Who should be assessed for risk of fracture?

Who should have a BMD test?

What is a BMD (Bone Mineral Density) Test?

What exactly happens during a bone mineral density test?

The most common bone density test in use today is called dual energy x-ray absorptiometry (DXA). This test involves lying on a table for several minutes while a small x-ray detector scans the spine, one hip, or both.

The amount of light (x-ray) that passes through the bone is measured, thus indicating how dense (thick or

thin) the bones are. The test is safe and painless and does not require any injections or any other discomfort. A very small amount of radiation from a DXA test is transmitted.

A T-score is calculated that describes the density of the bones (usually at the spine and hip) compared to this average.

The T-score is expressed in units, “standard deviations (SDs),” indicating how far the score deviates from what is considered normal for a young adult.

Below normal is always indicated with a minus (-) sign.

All women and men 65 years or older Collapse

Talk to your doctor about a BMD test.

Postmenopausal women and men 50 – 64 with risk factors for fracture including: Expand
Younger men or women (under 50) with a disease or condition associated with low bone mass or bone loss: Expand

In 2005, Osteoporosis Canada, in association with the Canadian Association of Radiologists, launched the 10-year absolute fracture risk assessment - CAROC.

In addition to BMD (lowest T-score of hip and lumbar spine), age, gender, fracture history and steroid use are taken into consideration to determine an individual’s 10-year risk of fracture.

The presence of both a fragility fracture and steroid use puts the patient at high fracture risk regardless of BMD result.

Version 2, now available for Canadian physicians, uses only femoral neck (hip) BMD rather than the lowest of hip and lumbar spine. 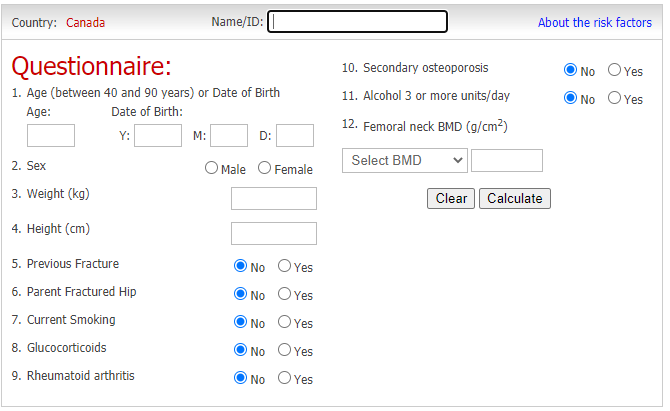 In 2008, the World Health Organization (WHO) launched the FRAX tool (Fracture Risk Assessment) – www.shef.ac.uk/FRAX. In 2010 Canadian data were added to this tool. In addition to femoral neck (hip) BMD, age, gender, fracture history and steroid use, FRAX also takes into account other clinical risk factors to calculate the absolute 10-year risk of a hip fracture or other major osteoporotic fracture (spine, forearm, upper arm). These factors include:

A validated tool for assessing fracture risk in long-term care residents. The FRS is the first tool developed and validated to predict hip fracture over a 1-year time period using risk factors specific to long-term care residents such as prior fractures, wandering, dementia and falls. The FRS can support clinical decisions in care-planning by identifying who is at risk.

What are the benefits of FRS?

Treat those at high risk! How can fractures be prevented?