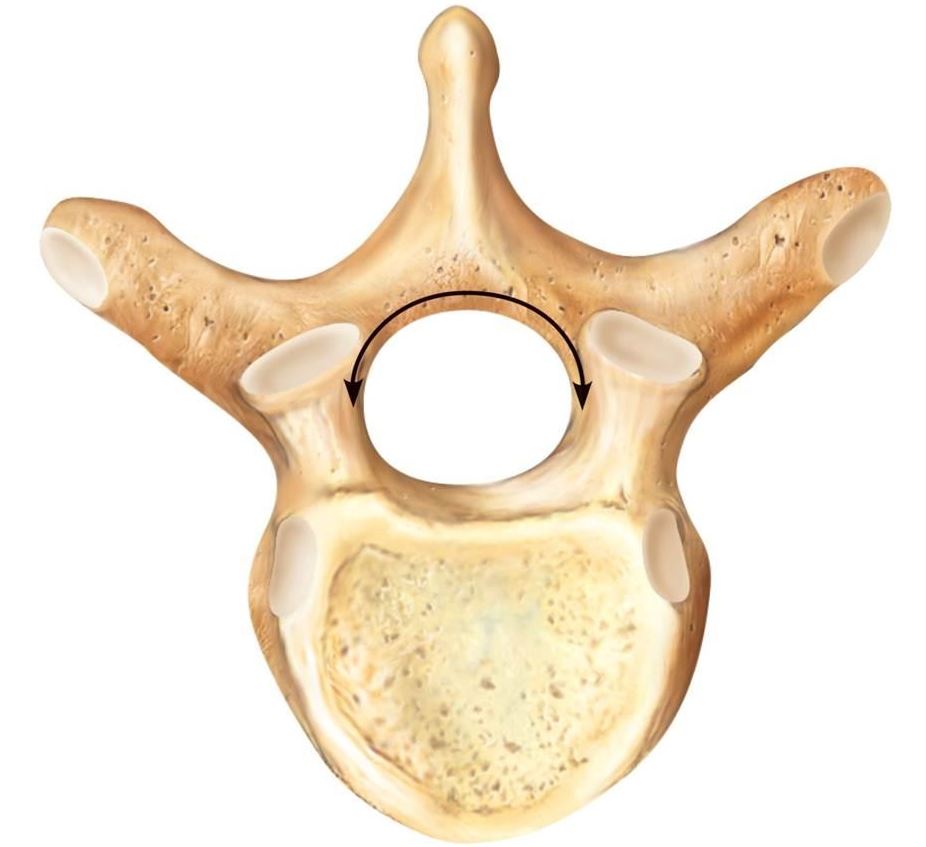 The final bony prominences extending near the juncture of the pedicle and laminae are the articular facets, sometimes referred to collectively as the zygopophyseal joints (or z-joints). There are two processes on each side – one superior and one inferior. Each superior facet articulates with the inferior facet of the vertebrae above it thus creating that z-joint, and is the main component which dictates the movement for that spinal segment. The superior and inferior articulating process in the thoracic region face relatively posteriorly and anteriorly, respectively. Therefore, the movements predominantly allowed throughout the thoracic movement are rotation and side bending with minimal flexion and extension between each segment.

Given that there are 12 segments, the total flexion or extension across the thoracic region could between 24 and 36 degrees.

The vertebral bodies and components of the vertebral arches are reinforced and connected to segments above and below by many ligamentous reinforcements.  Each spinous process has two main ligaments, one set of ligaments that run in-between each subsequent spinous process – the interspinous ligament and another ligament that runs nearly the length of the column, joining tip to tip – the supraspinous ligament.  (see Figure 3)  From the skull to C7, the supraspinous ligament spreads out in the midsagittal plane to become a distinct sheet-like ligament called the ligamentum nuchae. The purpose of these ligaments are to limit the amount of flexion and potentially to assist a return to neutral posture (a type of ligamentous rebound).

Ligaments between each transverse process – the intertransverse ligaments – help to limit side flexion and excessive rotation. The final ligament attaching to the vertebral arch is the ligamenta flava, a highly elastic ligament which attaches lamina to lamina. The main function of this ligament is to again resist excessive flexion and assist in the return to an anatomical position in extension. (see Figure 3)

Finally, there are two broad bands of continuous ligaments which span the length of the vertebral column, connecting vertebral bodies and intervertebral discs.  One is located anteriorly – the anterior longitudinal ligament (ALL) and one posteriorly – the posterior longitudinal ligament (PLL). Each ligament, again, resists excessive movement – the ALL resisting extension and the PLL resisting flexion. (see Figure 4)

Besides the z-joints, a movement segment for the vertebral column is the symphysis between the vertebral bodies, otherwise known as the intervertebral disc. The disc is composed of two parts – an outer collagenous ring surrounding a central gelatinous portion. (see Figure 5) The annulus fibrosus is composed of many layers of fibrocartilaginous lamellae which have the main function of limiting rotation between vertebrae.  The nucleus pulposus, the jelly-like centre of the disc serves to help resist compressive forces placed through the vertebrae.

Muscles acting on the spine can be divided into 2 main parts: an appendicular group and an intrinsic group. The appendicular group is composed of those muscles which attach to the upper limb and back and therefore act indirectly on the back. The group includes the rhomboids (major and minor), trapezius and  latissimus dorsi.  The location of these muscles can be reviewed on Figure 6.

The erector spinae muscles are three long bands from most medial to lateral: the spinalis, longissimus and iliocostalis muscles. This group broadly arises from the sacrum, iliac crest, and spinous processes of the lower thoracic and lumbar vertebrae.(Figure 7)  The most medially located band is the spinalis which connects spinous processes of adjacent vertebrae and are most plentiful in the thoracic region. The middle band, the longissimus is the largest portion, extending the entire spine and tends to be positioned over the transverse processes. The most lateral column is the ilicostalis and spreads out from the iliac crest to the ribs up to the lower cervical transverse processes. The function of this group is to side flex the spine when unilaterally activated and is the primary back extensor when contracted bilaterally.  It also can help control spine flexion through controlled contractions.

The transversospinalis group gains its name from its muscle attachments, running up & medially from transverse process to spinous process.(Figure 7)  It is comprised of three major subgroups: the semispinalis, multifidus, and rotatares. The semispinalis is the most superficial of the group, starting in the lower thoracic region ending at the skull. Generally this muscle spans 4-6 vertebrae from origin to insertion. Deep to the

semispinalis is the multifidus which runs the length of the entire column but is most developed in the lumbar region. Generally this muscle spans 2-4 vertebrae from origin to insertion. The deepest group is the rotatores muscles.  Best developed in the thoracic region (which makes sense as this is where most rotation occurs!), they are present in all parts of the spine. These fibres are generally very short and pass only 1-2 segments. 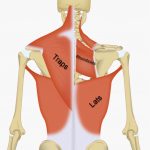 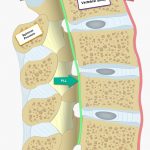 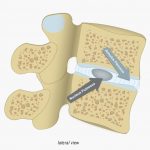 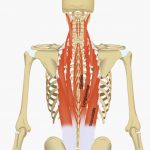 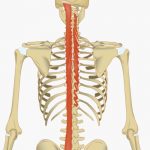 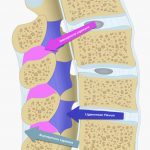