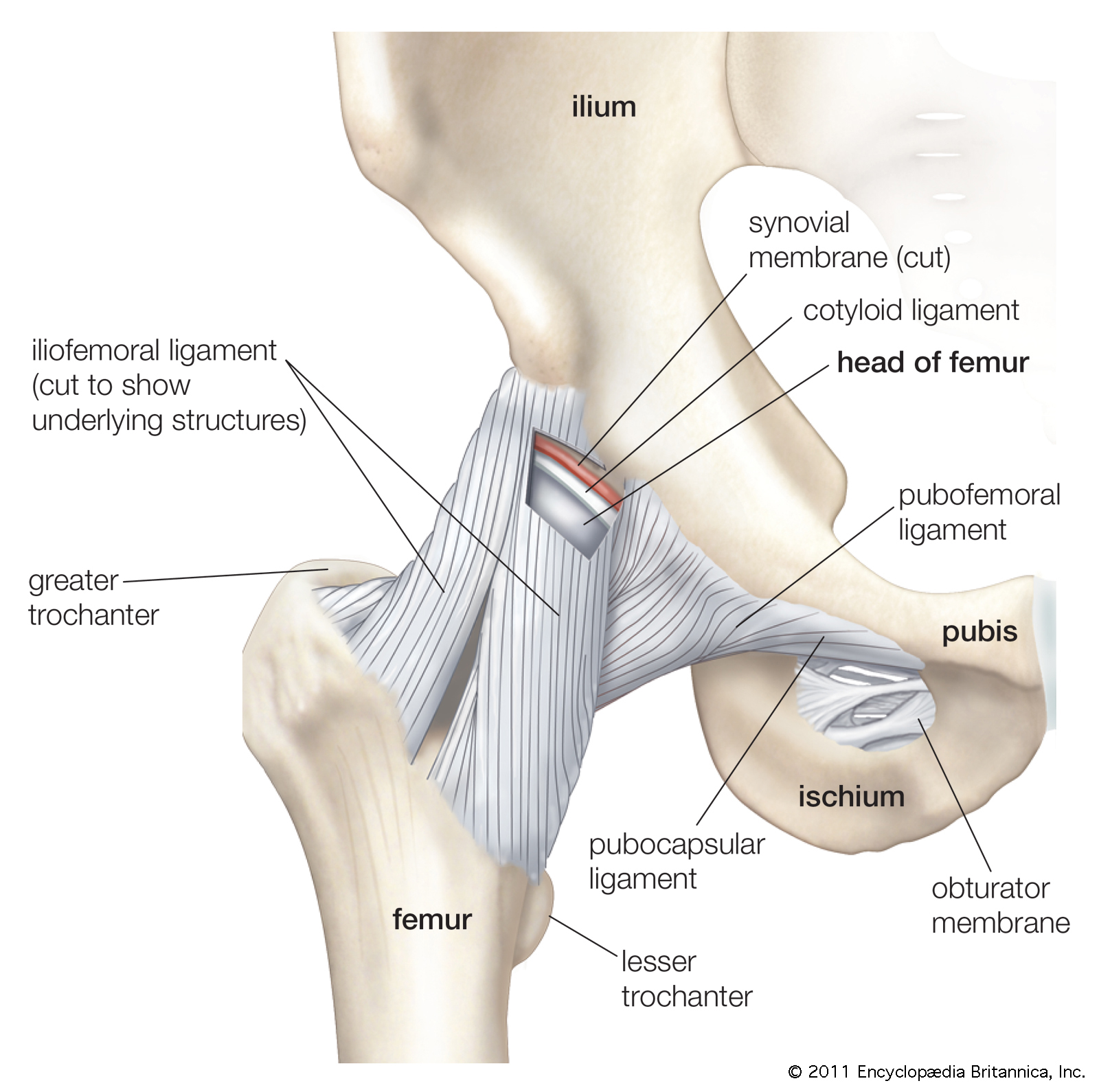 The hip, like all synovial joints, is surrounded by a fibrous capsule but is unique in that this capsule contains three thickenings which are interpreted as the ligaments of the hip.(see Figure 1) The three ligaments together all spiral around the femoral neck and head from posterior to anterior, such that they all become taut in extension and assist in the passive support of the joint during standing.

Most anteriorly is the iliofemoral ligament, which is shaped like an inverted Y, with the stem coursing down from the AIIS and the stems of the letter A spreading out along the intertrochanteric line of the femur.  Its main function is to resist excessive hip extension and external rotation. The pubofemoral ligament is positioned more anterior and inferior to the hip, passing from the iliopubic eminence to blend laterally with the deep surface of the iliofemoral ligament. The function o f this ligament in addition to resisting extension is to limit abduction of the hip joint.  Finally, the ischiofemoral ligament passes forward from its attachment to the ischium to attach laterally to the greater trochanter. This ligament mainly functions to resist extension or hyperextension. This ligamentous arrangement essentially leaves the posterior aspect of the femoral head unreinforced and thus susceptible to posterior dislocation.

The hip has many muscles acting upon it to produce its multiple movements: flexion, extension, medial & lateral rotation, abduction, adduction and circumduction. The muscles can be grouped by region: posterior, anterior, and medial. (Figure 2)

The posterior group is comprised of superficial and deep gluteal muscles and the hamstrings trio.  Gluteus maximus superficially covers all other gluteal muscles and has a broad attachment into the iliotibial band from the ilium, sacrum and sacrospinous ligament.  Its main functions are to extend the hip and laterally rotate. The hamstrings, comprised of biceps femoris, semitendinosus and semimebranosus also help to extend the hip.

Gluteus medius & minimus extend from the posterior surface of the ilium to the greater trochanter of the femur. These muscles, along with the tensor fascia lata, abduct and medially rotate the hip. The mneumonic rhyme used is often: “TFL, gluteus med & min all abduct the hip and rotate in!”  There are 6 deep muscles in the gluteal region which all have the main action to laterally rotate the hip. These are, from superior to inferior: piriformis, gemellus superior, obturator internus, gemellus inferior, obturator externus, and quadratus femoris.

Anteriorly, the muscles act on the hip to produce flexion, and include the iliopsoas, rectus femoris, sartorius and pectineus. Medially, muscles producing hip adduction include adductor brevis, longus, magnus, pectineus, and gracilis

Previous Topic
Back to Lesson
Next Lesson